Many readers find that Of Mice and Men is a sad book. How far do you agree?
‘Of Mice and Men’ is a novel about progression; all of the characters are on a ‘quest’ to find inner peace. This ‘quest’ goes with a lot of different emotions; emotions of satisfaction and hope as well as emotions of sadness and alienation.
From the very beginning on the novel is doomed to end sadly. Especially the simpleminded Lennie seems to – though unintentionally – provoke trouble. During this first confrontation Lennie has killed a mouse – not a good sign at all.
When they arrive at the ranch both men are confronted with the sadness and sobriety of ranch life. Candy, for instance, owns nothing except an old, blind and stinky dog. One day, his co-workers had enough of the animal and told him to shoot his dog, as it was cruel to keep it alive.
As the opening chapter of the book predicted, trouble appeared soon. The boss’s son, Curley, is an short-tempered ex-boxer who would, if they were weak enough, fight anyone he doesn’t like. This includes Lennie, and one day he starts hitting him. Lennie doesn’t accept this and he accidentally crushes Curley’s hand. Again, Lennie is portrayed as an innocent man who will, at a given moment, unintentionally cause a big conflict.
This conflict takes place on the day Lennie accidentally kills his own puppy by stroking it too hard. Curley’s wife, who has been an potential danger because of her flirtatious nature, came to comfort Lennie and told her own story and dream, which she never succeeded. She asked Lennie to stroke her hair, yet he grabbed her to hard and she started screaming. The only way Lennie could think of to get her quiet, was by closing her nose and mouth. When he realised what he had done, he fled to the place George told him of in the beginning of the story. This is where George found him, and after telling Lennie about their dream of having a farm together, he shot him in the head.
The book is indeed sad. In the end, none of the dreams came true. However, the book generally tends to work towards an equilibrium. Both deaths brought peace to the characters. This makes the book emphasise friendship and compassion rather than sadness and false hopes.

1 What are the characters like and how do we know this? (support with evidence from the text- examples, quotes, etc.)
Both characters, George and Lennie, are very different. George is clever and devoted, while Lennie is nothing but simple minded. The first scene of the book already demonstrated these characteristics. George’s first words, in which he warned Lennie not to drink from the water, confirm the caring aspect of George’s character. Some pages later, this is reconfirmed when George tells Lennie about their hopes for the future, which Lennie said to have forgotten.

2 How do we know that Lennie is simple. Is it his treatment or the way he is described? (as above- support your statements)
Lennie is shown to be simple by the way he is treated. George treats Lennie as if he were his three-year-old child that he has to protect from the dangers of the world they were living in. This is shown in the section where George keeps telling Lennie not to say a word when they will apply for their job.

3 Language in the text. Comment briefly on the language. (description, images, etc.)
The book itself is like the contradiction between the protagonists; on the one hand there is the well-developed descriptions of the all-knowing teller, and on the other hand there is the typical dialect of George and Lennie. This makes it particularly successful in illustrating the intentions of the characters.

4 In pairs: Discuss the relationship between Lennie and George and write down your findings, incorporating short quotes from the text.
Lennie and George are found to be good friends. George, the clever of the two, seems to almost sacrifice his life for the benefit of Lennie and him realising their shared dreams.

5 Individual: each student will adopt either Lennie’s or George’s point of view, and using your previous notes will write about their feelings for one another.
The good guy George is. He would do anything for me. Making me food, getting me a job. He can be kind of rude to me and take away my mouse. He says it’s not good to carry around mice. He was very angry and said all rude things like ‘I could have a family if you weren’t there’. But he would never do me harm.
He is always telling stories about our own house and land. I will have plenty of rabbits. I like rabbits. I like to pet rabbits. I like to pet animals and I like rabbits. And I like beans with ketchup. George says that I will have beans with ketchup when we have our own house. I can’t wait till that day comes.

Read the following definition of the American Dream, from James Truslow Adams’ book, The Epic of America, which was written in 1931. He was the one to first use the term.
“The American Dream is that dream of a land in which life should be better and richer and fuller for everyone, with opportunity for each according to ability or achievement. It is not a dream of motor cars and high wages, but a dream of social order in which each man and each woman shall be able to achieve the fullest stature of which they are capable of, and be recognized by others for what they are, regardless of the circumstances of birth or position.”
Now, define, in your own words, what you think the term, ‘American Dream’ means.
The American Dream is, according to me, the idea that no matter where one’s from, and no matter what ethnicity one is, all men deserve equal chances. They can all develop as much as they’ve got in themselves. On the other hand, I experienced the American dream also makes people unaware of their responsibility for the deeds of others. Obviously they think that others didn’t take their chances.

America has always been seen as a ‘land of opportunity’ where, with hard work, dream can be accomplished. Immigrants from all over the world came to America in the 1800s and 1900s to start a new life and gain new freedoms and opportunities; freedom and opportunity were once foreign and unattainable to many of America’s newcomers. However, although many people did achieve their dreams, there were even more people who struggled to survive. Considering the historical context of the novel, do you think the American Dream is achievable? Why or why not? Write your ideas below.
People had no other choice than to believe in the American Dream. They had no work nor homes, and worked hard to keep employed. Believing in the American Dream (which said that, by putting a lot of efforts in something, you could achieve anything you’d wish for) probably gave them hope, and in some sense, comforted them.

I think it tries to tell that the American Dream might not always turn out the desired way. The family in the cartoon probably put a lot of efforts into realizing their dream, but they ended up having all kind of problems, for instance related to money. 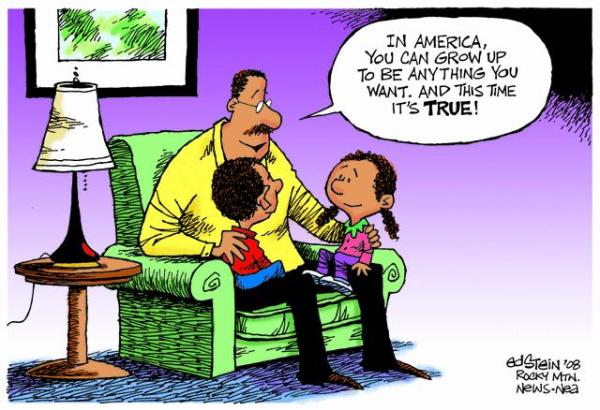 The cartoon basically says that one can achieve anything, just if they’re willing to work harder for it. When Barack Obama was born, there were a lot of segregated countries, in which black people couldn’t even be in the same schools or restaurants as white people. However, after putting enough will into his dreams, he managed to get himself into the White House.

I can’t see any solution!